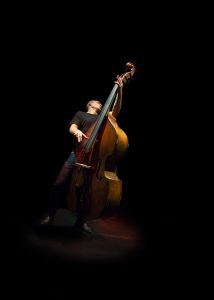 Over the last twenty five years Internationally acclaimed bassist, singer, composer Avishai Cohen, has grown to be one of the heavyweights of contemporary jazz, with a catalogue to rival those of even the most legendary in the field of jazz… and beyond.

His captivating live performances , unique sound and musical statement is now extensively known throughout every corner of the world, attracting large live audiences, listeners and passionate fans.Cohen music has shaped and influenced many.

Released worldwide from February 10th–May 5th2023 (Naïve)‘ Iroko ‘ is inspired and derived from the tradition androoted in Afro Caribbean music. Alongside him on stage are some of the very firstmusicians he performed with in NYC ,within the small club scene downtown, back in the early 90’s.

‘Iroko’is a long time dream I have had since knowing and playing with Abraham Rodrigues Jnr. A great unique singer, conguero and master of Afro Caribbean music in its full spectrum. I have assembled this all star band to now execute live this amazing project ‘Iroko’‘’ Avishai (Cohen, June 2022)

More about ; ‘Iroko’is a tree that is feared in some West African cultures where it originates and hence is shunned or revered with offerings. The Yoruba people believe that the tree is inhabited by a spirit, and anybody who sees the Iroko-man face to face becomes insane and quickly dies. According to the Yoruba, any man who cuts down a Iroko tree causes devastating misfortune on them self and all of their family, although if they need to cut down the tree they can make a prayer afterwards to protect themselves.