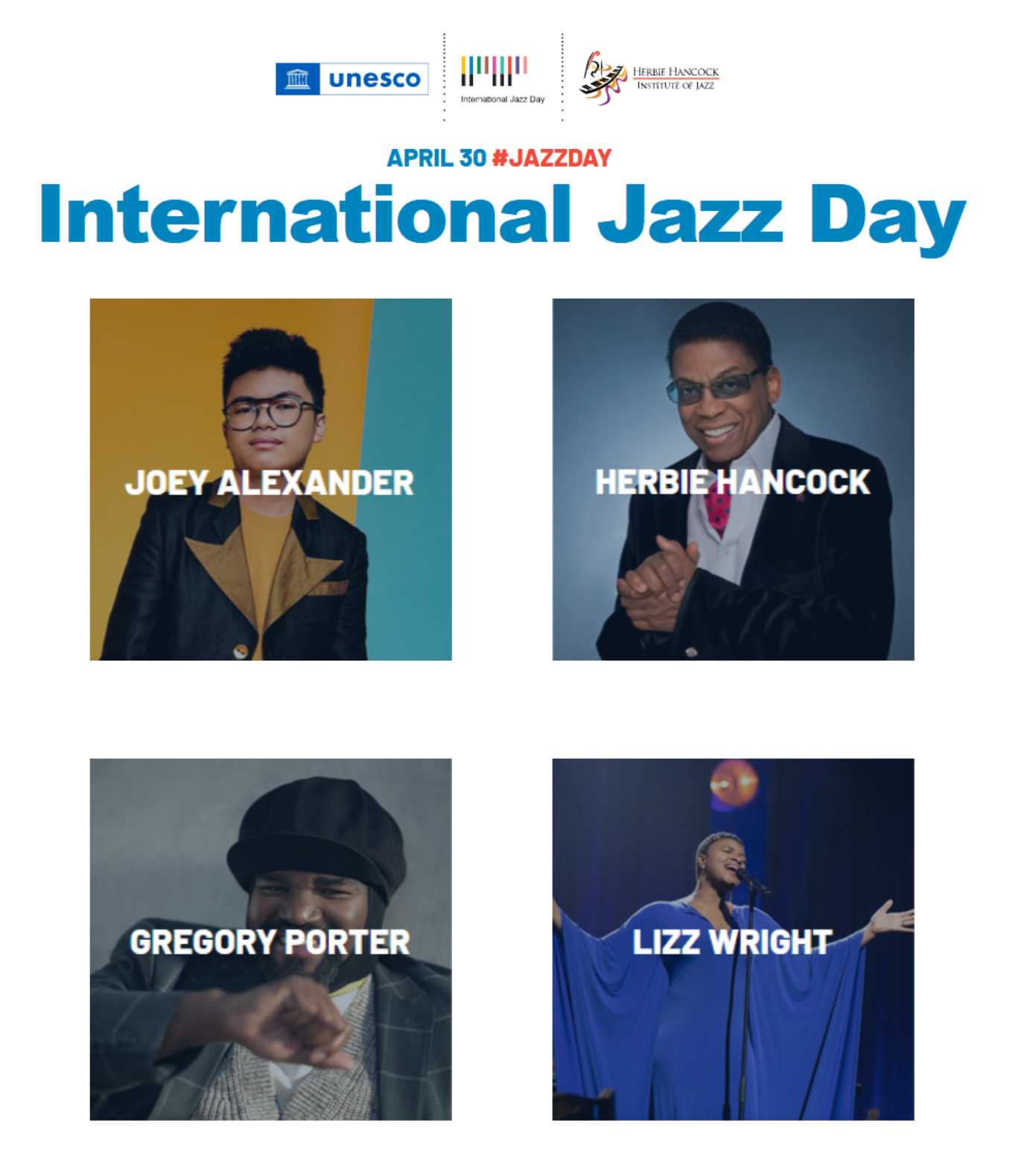 This year again, the International Jazz Day takes place on the web.
On Saturday, April 30th, 2022, find a great concert to follow live, with Joey Alexander, Herbie Hancock, Gregory Porter or even Lizz Wright on the menu…

Born in Bali, Indonesia, Joey Alexander has been performing professionally since 2013 when he was invited by Wynton Marsalis to perform at the Jazz at Lincoln Center Gala. Alexander subsequently moved to New York City and released his debut album, My Favorite Things, in 2015 on Motéma Music, followed by three more on the label and another on Verve. Alexander’s albums have netted three GRAMMY Award nominations – one for Best Jazz Instrumental Album and two for Best Improvised Jazz Solo. Over the course of his astonishing career, Alexander has performed with Wayne Shorter and Esperanza Spalding for International Jazz Day 2016 at the White House for President Barack Obama, at the Arthur Ashe Learning Center for President Bill Clinton, and at the Grand Ole Opry, Apollo Theater, Carnegie Hall and major jazz festivals and night clubs around the world. He has also been the subject of profiles on “60 Minutes” and in The New York Times. Origin is Alexander’s first album for Mack Avenue Records and will be released in May.

Herbie Hancock, a 14-time GRAMMY Award winner and Academy Award winner, is an internationally renowned pianist and composer who has been an integral part of every jazz movement since the 1960s. His Blue Note debut, Takin’ Off, included “Watermelon Man,” the first of many Top 10 hits. As a member of the Miles Davis Quintet, Hancock became one of the pioneers of modern jazz improvisation. His recordings in the ’70s combined electric jazz with funk and rock, influencing decades of music. In 2007, he won the GRAMMY for Album of the Year, becoming the first jazz musician to receive this honor in 44 years. His upcoming studio album includes collaborators as diverse as Flying Lotus, Terrace Martin, Kamasi Washington, Thundercat, Snoop Dogg, Lionel Loueke and Wayne Shorter. Hancock serves as UNESCO Goodwill Ambassador for Intercultural Dialogue.

Soulful vocalist Gregory Porter exploded onto the international music scene in 2010 and has received a continuing stream of awards and accolades. The youngest in a family of six, Porter grew up in Bakersfield, California, where his mother was a minister. As a child, he fell under the spell of his mother’s Nat King Cole records. Porter began singing in the jazz clubs of San Diego while attending San Diego State University on a football scholarship. His first studio experience was singing on Hubert Laws’ tribute album to Nat King Cole. Porter went on to appear in a new musical, It Ain’t Nothin’ But the Blues, which opened in San Diego and eventually enjoyed a run on Broadway. In 2009, Porter signed with Motéma Music and the following year released his debut CD, Water, which received a GRAMMY nomination for Best Jazz Vocal. Porter is a two-time GRAMMY Award winner for Best Jazz Vocal Album for his 2013 Blue Note Records debut, Liquid Spirit, and 2016’s Take Me to the Alley. His latest effort, Still Rising, is a 34-track double album featuring performances alongside Moby, Jamie Cullum, Jeff Goldblum, Renée Fleming, Dianne Reeves, Lalah Hathaway, Laura Mvula, Lizz Wright and others.

Acclaimed vocalist Lizz Wright is a steward of American music who brings brilliant color and vibrancy to her original works and compositions by some of the greatest songwriters of our time. At age 22, Wright gained national recognition for her show-stopping performance in a touring concert tribute to Billie Holiday. The following year, she signed with Verve Records and released Salt, which topped the Billboard contemporary jazz charts. Her subsequent releases have received rave reviews, and her Freedom & Surrender recording appeared on NPR’s Favorite Albums of 2015 list. Wright’s most recent album Grace offers singular arrangements of music by Ray Charles, Nina Simone, Allen Toussaint and other musical greats whose songs bind together traditions of the American South. Her upcoming album is Holding Space, recorded during a 2018 live performance in Berlin and slated to be released on Wright’s own label, Blues & Greens Records.